ROBERT GEORGE CAMPBELL Major in the Salvation Army promoted to glory in the service of his God and King on Friday, December 24th, 2021, aged 74. Greatly loved husband of Christine and father to David and Fiona, grandad to Alice, Bobby, George and Florence. Only son of the late George and Alice, brother to the late Joyce, Phyllis and Irene. A funeral service will be held at the Lowestoft Citadel of The Salvation Army 4, Battery Green Road, Lowestoft on Thursday, January 20th at 10.30 a.m. followed by the committal at St Michaels Church, Oulton at 12 noon. Donations if desired, may be given in lieu of flowers either on the day or by cheque only payable to "The Lowestoft Citadel" (to benefit the local community projects fund) and sent to Gordon Barber Funeral Home, 13 Carlton Road, Lowestoft, NR33 0RU. Tel. 01502 573632. 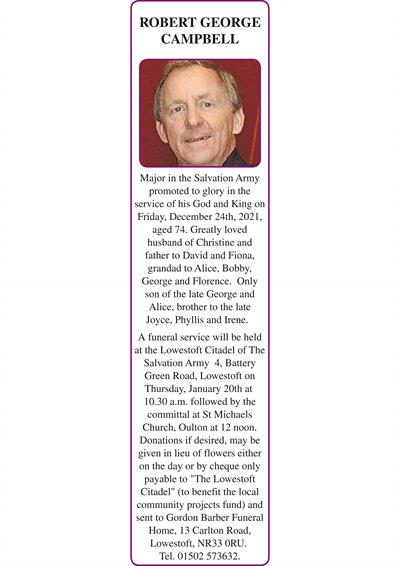